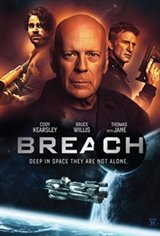 It's the year 2242, and a terrible plague has wiped out humanity on Earth, but not before a group of survivors flee Earth in a spaceship, hoping to find a new home on the planet they call "New Earth."

Noah (Cody Kearsley) gets on board the ship by posing to be a janitor, taking the place of another staff worker, along with his pregnant girlfriend Hayley (Kassandra Clementi). Also on board is veteran crew member Clay (Bruce Willis), who is appalled by Noah's incompetence.

When a crew member becomes inhabited by an alien parasite that secretly managed to get onboard, his body explodes, causing chaos.