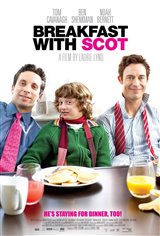 Watch Trailer
Eric (Tom Cavanagh) lives for all things hockey. Now in his thirties, he's managed to turn his stint as an ex- Toronto Maple Leaf into a full-time gig as commentator for sports TV. He's living the dream! But when Eric's boyfriend Sam (Ben Shenkman) announces that they're to become temporary guardians of a young boy, Eric's comfortable world shatters. Enter Scot (Noah Bernett) -- a recently orphaned, swishy 11-year-old sissy-of-a-boy -- and Eric's mirror opposite. Freaked out by Scot's 'joie de vivre', Eric and Sam gently nudge Scot away from scented hand cream and all things pink, towards a more 'acceptable' pastime -- hockey. But after Scot's disastrous first game, Eric begins to rethink the compromises he's made in his own life in order to be 'accepted'.

Based on the novel by Michael Downing.

Canadian Connection: Filmed in Toronto, Ontario. Most of the cast and crew are Canadian.