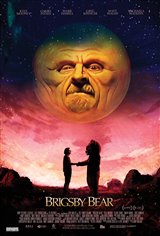 Brigsby Bear is the favorite show of 25-year-old James Pope (Kyle Mooney). Brigsby is giant stuffed bear who travels the galaxy defending mankind while teaching dubious life lessons, such as "curiosity is an unnatural emotion" and "trust only the familial unit." After each show, James rushes to his dated computer to write a blog on what the episode was about.

James lives with his parents, Ted (Mark Hamill) and April (Jane Adams), in an underground bunker. When the FBI arrive, James is told he was kidnapped at birth. Ted created Brigsby Bear for his eyes only, as a brainwashing tool. When James is returned to his birth parents (Matt Walsh, Michaela Watkins) and reintegrated into society, he finds the harsh world more difficult to deal with than the sheltered life he led with Brigsby. Not only that, but because his captor father produced the show, there are no more episodes left for James to watch. James decides to produce his own Brigsby Bear show, and his sister Aubrey (Ryan Simpkins), who's still in high school, along with her friend, aspiring animator Spencer (Jorge Lendeborg Jr.), decide to help.