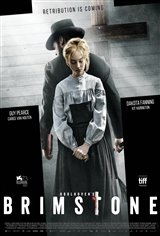 In the old American West, a young girl named Joanna (Emilia Jones) runs away from her father and winds up at a brothel, where she's forced to become a sex worker. As it turns out, she was running away from her sadistic father, The Reverend (Guy Pearce), who lusts after her. He comes after her and drags her away, telling her she'll learn to love him.

Years later, mute frontier wife Liz (Dakota Fanning) is a midwife for the small village where she lives. The Reverend comes to town, preaching fire and brimstone, and his methods of delivering punishment are unspeakably cruel. When a baby Liz is delivering doesn't survive, the grief-stricken father calls her a murderer, which prompts The Reverend to get involved.