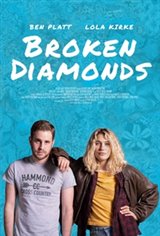 Scott (Ben Platt) is an aspiring young writer who wants to move to Paris to pursue his dream, while also trying to make ends meet. When he gets news that his father has passed away, Scott tries to sell the house but learns that he also needs his schizophrenic sister, Cindy (Lola Kirke), to sign off on it.

Although they're not exactly close, Scott puts his plans to move to Paris on hold and moves in with Cindy to take care of her when it becomes clear that her illness is too much for her to handle by herself.