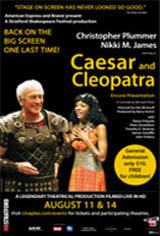 Shaw's legendary wit turns political drama into sparkling comedy when veteran strategist Julius Caesar becomes mentor to the enchanting teenage queen of Roman-occupied Egypt. Their first encounter under a desert moon will lead to a shift in the course of history, as Cleopatra gradually overcomes her timidity to become a determined player in the game of power politics. Christopher Plummer as Caesar, Nikki James as Cleopatra. Shot over 3 days during Stratford's Shakespeare Festival this stunning production will be presented at Cineplex Entertainment Theatres across Canada.