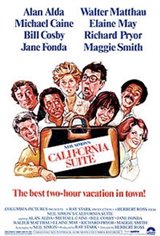 Playwright Neil Simon turned to the hotel setting he used so successfully in his stage-play (later a movie) Plaza Suite to explore four more human dramas in his play California Suite, which was adapted into this quite successful movie.

In the first episode, the divorced couple of Bill and Hannah Warren (Alan Alda and Jane Fonda) have rented a suite in a posh Beverly Hills hotel in order to have a discussion about who will get the custody of their child.

In the next episode, Sidney Cochran and Diana Barrie (Michael Caine and Maggie Smith) are a hilarious pair of Hollywood stars who have rented the suite to await their appearance at the Academy Awards: it is a date of convenience which enables the sexually adventurous duo to conduct their other, more unconventional alliances out of the public eye.

Drs. Willis Panama and Chauncy Gump (Bill Cosby and Richard Pryor) have brought their families to Beverly Hills for a vacation which takes on nightmarish tone. Finally, Marvin Michaels (Walter Matthau) tries frantically and unsuccessfully to explain the situation to his wife (Elaine May) when she catches him in flagrante delicto with a hooker.