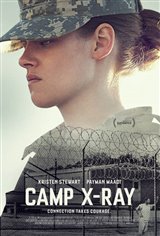 American soldier Amy Cole (Kristen Stewart) is sent to detention camp in Guantanamo Bay after enlisting in the military to escape from her small town, in spite of her wish to go on a military tour in Iraq.

Once she enters Guantanamo Bay she befriends Ali, one of the detainees, who has been at the detention camp for over eight years. While she continues to bond with Ali she is forced to deal with the contempt and hatred from other Muslim detainees as well as unwanted advances from her superior officer.