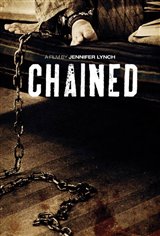 When Tim was nine years old, he and his mother were abducted by Bob (Vincent D'Onofrio), a serial-killing taxi driver who stalks his prey along city streets. Tim's mother was murdered but the boy was kept as a chained slave, forced to bury the bodies of the young female victims Bob brought home.

Now as a teenager, Tim (Eamon Farren) shares a father/son/protégé bond with his captor but ultimately must decide whether to follow in his footsteps or finally break free.