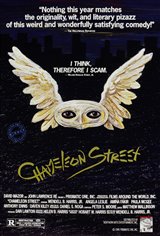 Wendell B. Harris wrote, directed, and stars in Chameleon Street, a sly comedy based loosely on the real-life exploits of conman William Douglas Street, who demonstrates a gift for becoming what people want him to be. The film opens with Street (Harris) being interviewed by a prison psychiatrist.

In this scene, he expresses what is basically his mantra, I think, therefore I scam. The film then flashes back to Street's earlier days, living with his parents, and working for his taciturn father installing burglar alarms.

Street eventually marries a beautiful, intelligent woman, Gabrielle (Angela Leslie), who sends him off each day with the same message -- Make some money.

Overcome by boredom and desperate for cash, Street concocts a shakedown scheme that completely backfires when his accomplice, Curtis (Anthony Ennis), signs Street's name to the extortion note, and sends it to the local papers. Ironically, no charges are pressed, and the scam turns Street, briefly, into a media darling. He finds he enjoys the spotlight.

Gabrielle is less pleased. Street next tries to pass himself off as a writer from Time Magazine in order to interview a women's basketball player (Paula McGee, who plays herself). She had the four 'B's, he exults, Black, Beauty, Brains, and Basketball.

As his relationship with his now pregnant wife disintegrates, Street engages in his most ambitious scheme yet -- posing as an Harvard-educated intern at a local hospital. Everything is going smoothly until he's called upon to perform a hysterectomy.

Harris' low-budget film won the grand prize at the Sundance Film Festival, but only received limited theatrical distribution. Harris disappeared from national view until his memorable supporting role in Steven Soderbergh's Out of Sight in 1998. He also had a small part in the 2000 teen comedy Road Trip.