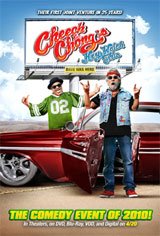 The best buds of comedy are back and funnier than ever! In their triumphant return 25 years in the making, Cheech & Chong embark on an all-new trip that will leave you rolling with laughter.

Cheech & Chong's Hey Watch This is a feature film showcasing the guys' hugely successful reunion tour, "Cheech & Chong: Light Up America," where they performed together for the first time in over 25 years. The pop culture duo performed for more than 100 audiences, grossing eight figures, making them one of the most sought after shows of 2008-2009.