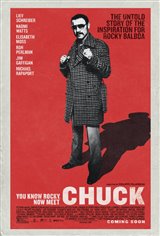 Tells the true story of former New Jersey heavyweight boxer Chuck Wepner, who was the inspiration behind Sylvester Stallone’s Rocky. Chuck may have gone from a liquor salesman to going 15 rounds with the legendary Muhammad Ali, but the film shows that his toughest fights were addictions to drugs, booze, and wild women.