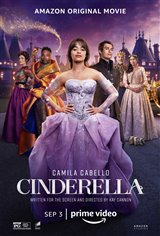 Ella (Camila Cabello) lives as a servant in her late father's house, with her stepmother (Idina Menzel) and stepsisters. All she wants is to become a dress designer and start her own business. Meanwhile, Prince Robert (Nicholas Galitzine) is being forced by his father (Pierce Brosnan) to find a wife.

When Ella attends a gathering outside the palace, Prince Robert notices her and is immediately intrigued. He decides to disguise himself as a villager in order to find her again. When he spots her, she's trying to sell a beautiful dress that she designed and made, but instead, she's ridiculed by the other villagers.

He insists that she attend the upcoming ball, if only to mingle with the wealthy, who might be interested in her dress designs. She agrees, but when her stepmother ruins the dress Ella made to wear to the ball, she decides not to go. That is, until her her Fairy Godmother (Billy Porter) shows up and makes it possible for her to attend the ball.