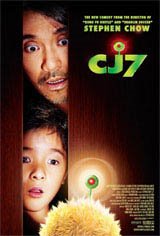 Ti (Stephen Chow) is a poor father who works all day, everyday at a construction site to make sure his son Dicky Chow (Xu Jian) can attend an elite private school. Despite his father's good intentions to give his son the opportunities he never had, Dicky, with his dirty and tattered clothes and none of the "cool" toys stands out from his schoolmates like a sore thumb.

Ti can't afford to buy Dicky any expensive toys and goes to the best place he knows to get new stuff for Dicky -- the junk yard! While out "shopping" for a new toy for his son, Ti finds a mysterious orb and brings it home for Dicky to play with. To his surprise and disbelief, the orb reveals itself to Dicky as a bizarre "pet" with extraordinary powers. Armed with his "CJ7" Dicky seizes this chance to overcome his poor background and shabby clothes and impress his fellow schoolmates for the first time in his life. But CJ7 has other ideas and when Dicky brings it to class, chaos ensues.