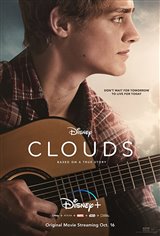 Although the news hits him hard, Sammy and his family won't let him give up on his dreams. Zach and Sammy record a song on video and launch it on YouTube, which instantly gets thousands of views. They then get the chance of a lifetime when they're offered a recording contract with the help of Zach’s mentor and teacher, Mr. Weaver (Lil Rel Howery).

Zach also gets support from his girlfriend Amy (Madison Iseman) and his parents, Rob and Laura (Tom Everett Scott and Neve Campbell), especially when he feels the enormity of what the cancer diagnosis means.

Based on the 2014 memoir Fly a Little Higher, written by Zach's mother, Laura Sobiech.