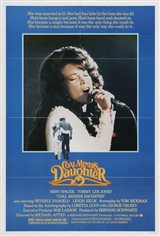 Loretta Lynn was one of the first female superstars in country music and remains a defining presence within the genre; with her strong, clear, hard-country voice and tough, no-nonsense songs about husbands who cheat and wives who weren't about to be pushed around, Lynn introduced a feminist mindset to Nashville years before the phrase women's liberation became common currency.

Coal Miner's Daughter is a screen adaptation of Lynn's autobiography, starring Sissy Spacek as Loretta Lynn. One of eight children born to Ted Webb (Levon Helm), a coal miner raising a family despite grinding poverty in Butcher's Holler, KY, Loretta married Dolittle Mooney Lynn (Tommy Lee Jones) when she was only 13 years old. A mother of four by the time she was 20, Lynn began singing the occasional song at local honky-tonks on weekends, and at 25, she cut (at Mooney's suggestion) a demo tape that earned her a deal with an independent record label.

Loretta and Mooney's tireless promotion of the record (including a long road trip through the south in which they stopped at every country radio station they could find) paid off -- Loretta's first single, Honky Tonk Girl, hit the charts and earned her a spot on the Grand Ole Opry. Stardom called and Loretta never looked back, but success brought with it both joy (a long string of hit records and sold-out concerts and a close friendship with Patsy Cline) and sorrow (a nervous breakdown brought on by overwork and a great deal of stress to a marriage that endured -- but just barely).

Sissy Spacek won an Academy award for her vivid, thoroughly natural performance as Loretta (she also did her own singing), and Levon Helm (drummer for the legendary rock group the Band) made an impressive screen debut as her father. Ernest Tubb makes a cameo appearance as himself.