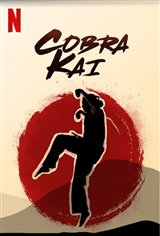 Johnny is an unemployed handyman with an estranged teenage son who resents him for his non-involvement in his life. He also resents Daniel, who is a successful businessman with his own car dealership, complete with commercials and billboards. Not only that, but he has a happy married life with two kids.

When Johnny steps in and takes down a gang of teenage thugs who are beating up his young neighbor, Miguel (Xolo Maridueña), he comes to the conclusion that he should restart the notorious Cobra Kai dojo.

As Miguel trains with Johnny, he comes to the attention of Daniel's daughter, Samantha. and his comrades are gradually poisoned by Cobra Kai's thuggish philosophy. Meanwhile, while Daniel's daughter, Samantha (Mary Mouser). Meanwhile, Johnny's son Robby (Tanner Buchanan) begins to wok for Daniel and is taken under his wing as Daniel teaches him karate and the philosophy he learned from Mr. Miyagi.