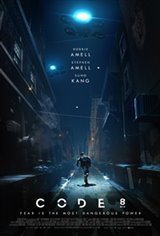 In the near future, a minority of people with supernatural abilities—from telekinesis to healing to superstrength—were once valued citizens. Now, their skills in the workplace have become unnecessary due to automation and not only that, they've been banned from using their powers. Fearful of their powers, the government even sends drones overhead to spy on them. When someone is caught using their gift, they're immediately arrested.

Connor (Robbie Arnell), who can power and disable electricity, lives with his widowed mother, Mary (Kari Matchett). When they both lose their low-level jobs because the rest of society has become wary of people who have powers, they grow desperate. Mary has cancer and in order to be able to pay for her treatment, Connor accepts a sketchy job from a man named Garrett (Stephen Amell). As it turns out, Garrett has assembled a team of gifted people—in order to pull off robberies.