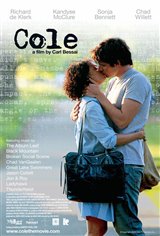 Cole Chambers is a handsome, magnetic, talented 22-year-old writer with dreams too big for his small town. He feels frustrated and trapped as he spends his life picking up the pieces of his shattered family and using them as the basis for his writing and recreating an alternative reality.

When Cole gets the opportunity to bring his talents to the city, he sees his potential for the first time—that he can get out of his small town and make his life what he had wanted it to be.

Cole spends increasing amounts of time away from home, falling in love with Serafina, a beautiful black girl from a privileged background with secrets of her own. Shackled to his family by responsibility, Cole finds it increasingly hard to lead a double life and is forced to choose or do the unthinkable: unite his two worlds.

Canadian Connection: Filmed in Vancouver and Lytton, BC.