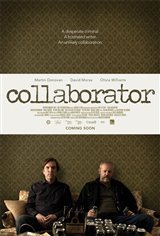 Successful playwright Robert Longfellow (Martin Donovan) decides to return to his childhood home in the San Fernando Valley to visit his mother, Irene (Katherine Helmond). In need of cash, he's also planning to meet a Hollywood movie producer about a job re-writing the script for a horror movie.

Still living across the street is Gus (David Morse), a childhood friend of Robert's older brother. Fascinated by Robert's success, Gus heads over with a bag of beer when Irene goes out for the evening. Robert reluctantly invites him inside.

Robert's initial reluctance fades as the two men bond while discussing writing and theater. Meanwhile, the police show up at Gus's house. Gus, whose past includes having done time for a violent crime, is wanted for murder. When the police realize he's across the street, they surround the house the two men are in. It soon evolves into a hostage situation that's aired lived on television.