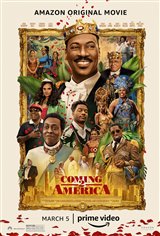 When Akeem (Eddie Murphy) discovers he has a long-lost son who is the heir to the throne of Zamunda, he returns to New York City at his father's bidding, with his trusted confidante Semmi (Arsenio Hall). Akeem's wife and three daughers are less than pleased by this sudden change in events, as they thought the eldest daughter would be the heir. Akeem finds his son, whose name is Lavelle (Jermaine Fowler), but Lavelle only agrees to go if his mother (Leslie Jones) can come with him to Zamunda.

Akeem agrees, and although he doesn't believe in arranged marriages, when a young woman's hand is offered to Lavelle, Akeem is anxious for the match to take place, as it would stop a war from happening. However, Lavelle first needs a lot of grooming in order to make up for all the years of royal training he missed and a young woman named Mirembe (Nomzamo Mbatha) is assigned the task of getting him ready. But will all go as planned?