Considering Love and Other Magic 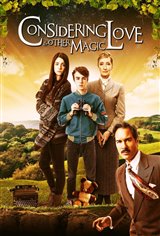 Jessie (Maddie Phillips) is hired to tutor a teenage boy named Tommy (Ryan Grantham) in science and math. He seems old-fashioned, and when she looks at the books he's using to study from, she finds they're from the 1940s. Tommy tells her he's not allowed to leave the house and that he first arrived there in the summer of 1952.

Later, he admits that he's an illusion, that Veronica Guest (Sheila McCarthy), the author who owns the house (and who hired Jessie), invented him on her typewriter. To add to the mystery, Jessie finds a vintage magazine that features a photo of Tommy. Conflicts arise when Tommy begins to fall in love with Jessie, who has eyes for a British classmate named Steven (Rory J. Saper).

Filmed in Winnipeg, Manitoba. Most of the cast is Canadian, as is screenwriter/director Dave Schultz.