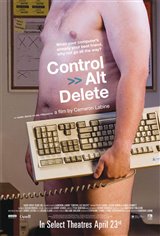 But all honeymoons must end and Lewis' eye starts to wander from his dependable home desktop. His desire for newer, sexier models grows until he finds himself copulating with co-workers' CPUs. When his boss, Angela, vows to identify the "computer rapist," Lewis tries to throw off suspicion by dating the company's mousey receptionist, Jane. But there's more to Jane than meets the eye—with the new millennium fast approaching and a massive motherboard calling, it seems he has to choose between his freaky fetish and the challenge of real love. Or does he?