CSA: The Confederate States of America 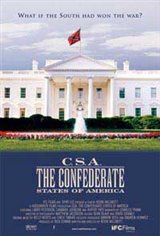 63 votes and 6 Reviews | Write a Review
Through the eyes of a faux documentary, the film takes a look at an America where the South won the Civil War. Supposedly produced by a British broadcasting company, the feature film is presented as a production being shown, controversially, for the first time on television in the States.

After victory, President Davis brings slavery back to the northern states by offering a tax rebate to businesses and households who will buy and own them. Liberals move to Canada. As world war looms, the CSA takes a non-aggressive stance toward the Third Reich and their move toward racial purity (although not condoning their wasting of possible slave stock by the Final Solution) and makes a preemptive strike on Japan on December 7, 1941.

Kennedy is assassinated soon after being elected, as it appears he will not only emancipate but also give women the vote. A growing black terrorist base stems from Canada and a Cold War breaks out...complete with the Cotton Curtain being built between the two countries.