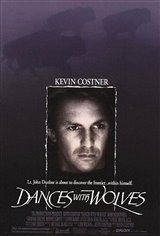 While on a suicide mission during the Civil War, Lieutenant John W. Dunbar (Kevin Costner) accidentally leads the Union troops to victory. Named a hero, John is sent to a remote post in South Dakota. Although it's seems to be deserted, John encounters a wolf that he calls “Two-Socks,” as well as a nearby Sioux tribe.

Attracted to their simple life, John joins the tribe and is renamed "Dances with Wolves." John meets a white woman named "Stands With a Fist" who was raised by the tribe and he falls in love. Soon the peaceful life the tribe leads is threatened when the American Union comes in to take over the Sioux land. John must make a difficult decision that not only threatens his life but the lives of his newfound family.