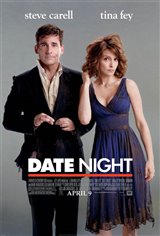 Phil (Steve Carell) and Claire Foster (Tina Fey) are a sensible, loving couple with two kids and a house in suburban New Jersey. The Fosters have their weekly "date night"—an attempt at re-experiencing the spice of the dates of yesteryear, involving the same weekly night out at the local Teaneck Tavern. Their conversations quickly drift from barely-date talk to the same chore-chat they have at the dinner table at home. Exhausted from their jobs and kids, their dates rarely end in fore- or any other kind of play, let alone romance.

After seeing two of their best friends—another married couple with kids in suburban New Jersey—split apart from living the same life they themselves lead, Phil and Claire begin to fear what may lie ahead: a state of bland indifference and eventual separation.

In an attempt to take date night off auto-pilot, and hopefully inject a little spice into their lives, Phil decides a change of plans is in order: take Claire into Manhattan to the city's hottest new restaurant. The Fosters, however, don't have reservations. Hoping to be seated sometime before the clock strikes twelve, they steal a no-show couple's reservations. What could it hurt? Phil and Claire are now the Tripplehorns.

The real Tripplehorns, however, it turns out, are a thieving couple who are being hunted down by a pair of corrupt cops for having stolen property from some very dangerous people. Forced on the run before they've even finished their risotto, Phil and Claire soon realize that their play-date-for-parents has gone hilariously awry, as they embark on a wild and dangerous series of crazy adventures to save their lives... and their marriage.