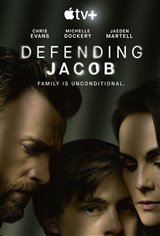 District Attorney Andy Barber (Chris Evans) and Laurie Barber (Michelle Dockery) live a quiet, small town life with their teenage son, Jacob (Jaeden Martell). After a young boy is found dead in a nearby park, Andy is assigned the case. When it turns out the victim was a classmate of Jacob's, Andy is asked to step down, for fear that his involvement presents a conflict, but he insists on remaining on the job.

However, he has no choice when it turns out Jacob's fingerprint was found on the tag of the dead boy's shirt. Jacob has an explanation, but it doesn't stop the police from arresting him and charging him with murder. Andy is relieved of his duties and Laurie, who works with children, is also temporarily let go from her job. As their lives hang in the balance, secrets emerge and Laurie begins to wonder if Jacob is innocent.

Based on the 2012 New York Times best-selling novel of the same name.