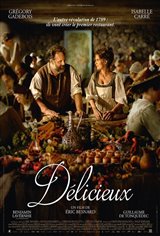 France, late 18th century. During a banquet organized by the Duke of Chamfort, Pierre Manceron has the audacity to serve a dish of his own invention, created with truffles and potatoes. Summoned by the Duke to apologize for the dish, the daring cook refuses, only to be dismissed immediately. With his son, Pierre returns to his childhood home, where he transforms the old family barn into a rest stop. Under the pretext of wanting to learn the culinary arts, a mysterious woman named Louise gets involved in the chef’s work and life. Together, they create a unifying place celebrating the virtues of simple and tasty regional cuisine. The success of their business reaches Chamfort, who has still not found a replacement for his former chef.