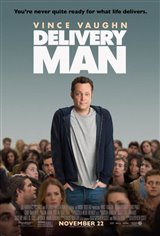 David Wozniak (Vince Vaughn), a meat delivery truck driver in his forties who works for his father, finds out years after making anonymous donations to a fertility clinic that he has fathered 533 children. He becomes aware of it when 142 of them file a lawsuit to reveal his identity.

His friend Brett (Chris Pratt), a former lawyer, works on his defense and gets him a package of photos and information about the children. Curious, David begins to find out who they are and gets involved in his children's lives without telling them who he is.

Canadian Connection: Directed and written by Ken Scott, who wrote and directed the award-winning French-Canadian movie Starbuck, which this movie is based on. Scott was born in Dalhousie, Nova Scotia and grew up in Laval, Quebec. Quebec actor Sébastien René reprises his role in this version.