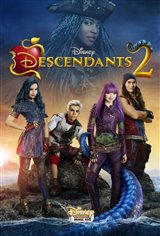 Mal (Dove Cameron), Carlos (Cameron Boyce), Evie (Sofia Carson) and Jay (Booboo Stewart) have become citizens of Auradon. Although the others are happy with their new lives, Mal is struggling. She feels uncomfortable with her new life as King Ben's (Mitchell Hope) girlfriend, and feels pressure to maintain a princess-type personality — complete with newly dyed blonde hair.

Ben discovers to his displeasure that Mal is continuing to use magic and they argue about it. Feeling she doesn't fit in, Mal returns to the Isle, where she has her purple hair restored by Dizzy (Anna Cathcart). Meanwhile, Mal's friends, including Ben, go to the Isle to get her back, but run into trouble with Mal's archenemy, Uma (China Anne McClain), who is jealous of the four teens who were chosen to attend school in Auradon, especially Mal.