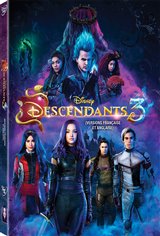 Mal (Dove Cameron), Evie (Sofia Carson), Carlos (Cameron Boyce) and Jay (Booboo Stewart), the teenage sons and daughters of Disney's most infamous villains, return to the Isle of hte Lost to recruit a new batch of villainous offspring to join them at Auradon Prep.

A barrier breach threatens the safety of the people of Auradon as they leave the Isle, so Mal decides to permanently close the barrier, but despite her efforts, a dark force descends on Auradon, and the villain kids have to battle to save Ben (Mitchell Hope) and the rest of their friends.