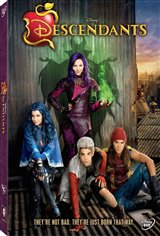 In a peaceful and idyllic kingdom, Ben (Mitchell Hope), the teenaged son of the King and Queen (Beauty and the Beast's Beast and Belle), is ready to take on the throne.

His first proclamation is to offer a chance at redemption to the trouble-making offspring of Cruella de Vil, Maleficent the Evil Queen and Jafar, who are all imprisoned on a forbidden island with other villains, sidekicks, evil stepmothers and stepsisters.

However, the evil teens are conflicted. Should they follow in their parents' footsteps and do evil deeds, or embrace their innate goodness?