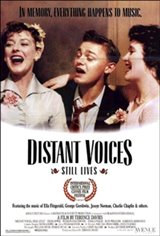 Set in 1940s England, Distant Voices/Still Lives is a compassionate look at a radically dysfunctional family. The son and his mother must endure the casual and overt cruelties of the bull-necked father. The ongoing abuse takes its toll in the form of failed marriages and misguided attempts at seeking security outside the family unit.

As was the case with his earlier short subject trilogy (The Children, Madonna and Child, Death and Transfiguration), director Terence Davies based much of the material on his own life, combining rheumy-eyed cynicism with soft-edged nostalgia (the musical track, drawn from popular wartime songs, is particularly evocative).