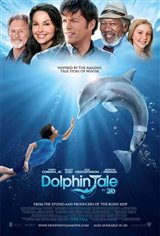 Sawyer Nelson (Nathan Gamble) has been withdrawn ever since his father left the family several years earlier. Now 11, Sawyer has failed all his classes and has to go to summer school.

One morning, he's called over by a fisherman who has found a beached dolphin wound up in a net. Sawyer manages to cut some of the rope from the baby dolphin, while the man calls for help. The dolphin goes to the Clearwater Marine Aquarium, but her tail eventually has to be removed because the rope that had been wound around it cut off her circulation.

Sawyer goes to visit every day and he forms a bond with the dolphin, who has been named Winter. But when Winter develops health problems due to her lack of tail, and the Aquarium runs into financial trouble, Winter's future becomes uncertain.