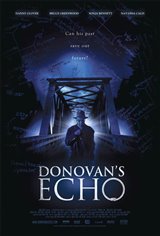 Years ago, Donovan Matheson's (Danny Glover) wife and daughter died in an accident. When he returns to his hometown 30 years later, he worries that the tragic events of the past will repeat themselves.

Convinced his neighbor and her young daughter are doomed to die on the anniversary of his wife and daughter's deaths, Donovan tries to get help from his brother-in-law (Bruce Greenwood), a police officer. Unfortunately, when Donovan's facts don't add up, his sanity is questioned and Donovan is terrified that he's running out of time.