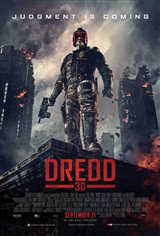 Set in the future, the world is depicted as nothing but a wasteland. Off an eastern coast lies Mega City One—a metropolis where criminals rule the streets and the only form of order is in a police force known as the "Judges." They hold the combined powers of judge, jury, and executioner.

Judge Dredd (Karl Urban) is a law enforcement officer who belongs to this elite corps. He is well-known and feared throughout the city as he faces the everyday challenge of getting rid of the latest scum. His latest assignment is to take down a gang at the heart of a dangerous drug epidemic called SLO-MO, which alters reality by making time feel like it's passing at a fraction of its real speed.

In order to stop the gang that is producing and dealing the drug, Dredd teams up with Anderson (Olivia Thirlby), a trainee with powerful psychic abilities. Together they learn that Ma-Ma (Lena Headey)—a prostitute turned drug lord— controls the ruthless clan and has waged a war against the Judges. What results is a vicious battle between Ma-Ma's clan and the Judges in a fight to the death.