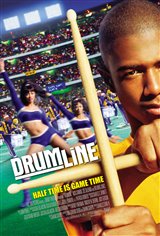 Devon Miles (Cannon), a young, gifted hip-hop drummer from Harlem wins a full music scholarship to Atlanta A&T University with the hopes of gaining a spot as a drummer on the school's renowned marching band's drumline. Devon, sporting a talent that is both raw and undisciplined, has one problem: he marches to the beat of his own drum.

Surmounting overwhelming odds, he snares a spot as a starter, much to the disdain of a resentful senior class band member, Sean Taylor (Roberts), who dismisses the freshman's skills as bogus. When Taylor discovers something amiss about Devon's abilities, he alerts Dr. Lee, the school's demanding, dedicated band director, who suspects that the upstart talent may have duped the school into awarding him his scholarship. The situation threatens not only Devon's future at the school, but more immediately, his spot on the band's drumline just before the heralded Big Southern Classic, one of the region's most popular music competitions.