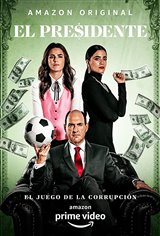 In this eight-episode series, the real story of the FIFA Gate Scandal, which brought down FIFA president Sepp Blatter and UEFA president Michael Platini, is unveiled.

Sergio Jadue (Andrés Parra), a lowly director of a small-town soccer club in Chile, unexpectedly finds himself the president of the Chilean soccer association. Drunk with power, he pressures Marcelo Bielsa, one of the most revered soccer managers in the world, to resign as the coach of Chile’s national team.

The bumbling Jadue becomes the protégé of the infamous head of the Argentine football association, Julio Grondona (Luis Margani), in addition to being one of the key players in a $150 million bribery conspiracy case.

Jadue goes on to become the FBI's key to undoing the largest corruption scheme in the world of soccer.