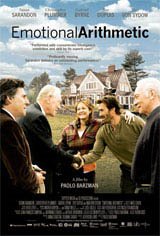 In 1945, Jakob Bronski, a young dissident held at Drancy, takes two children, Melanie and Christopher, under his charge. Forty years later Melanie discovers that a now elderly Jakob, whom she believed had been taken from Drancy to Auschwitz and killed, is still alive.

She immediately invites him to live with her and her family on their farm in Canada. Jakob arrives with Christopher as a surprise for Melanie and she and Christopher must face the truth of the bond between them. The past explodes into the present in an unexpected and tender love story which is life altering for them and for those around them.