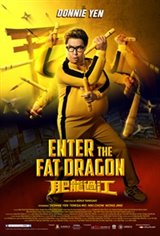 Fallon Zhu (Donnie Yen) is a Hong Kong police officer known as an agile fighter with a high crime detection rate. Dumped by his fiancée Chloe (Niki Chow), Fallon becomes heartbroken and starts indulging in food. In six months, he gains over 200 pounds. His superior, Superintendent Huang, puts him in charge of escorting a convict to Japan. A series of mishaps befall him in Japan; not only does he lose all of his belongings, he also loses the convict in his custody, who turns up dead.

His luck overturns when he meets Thor (Wong Jing), another Hong Kong citizen. The two join forces to solve the mystery behind the convict's strange and sudden death. Troubles continue to snowball, affecting those around Fallon, who is determined to uproot the gang behind all of this.