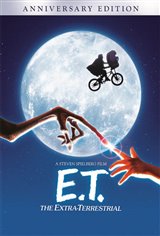 The 30th anniversary re-release of the classic 1982 film about an alien who gets stranded on Earth and is found and befriended by a young boy named Elliott (Thomas). Nicknamed E.T., the alien learns from Elliott about life on Earth, while Elliott learns about the true meaning of friendship and love. As government agents close in on E.T.'s location, the pair embark on the adventure of a lifetime as Elliot tries to help E.T. return to his home planet.