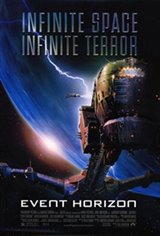 In this sci-fi/horror scarefest, Dr. William Weir (Sam Neill) is a scientist who has designed a spacecraft called Event Horizon which will explore the outer reaches of space past the planet Neptune; the ship employs a special transport mechanism that, in effect, creates a black hole that the ship can pass through, allowing it to travel tremendous distances in a few seconds.

The Event Horizon mysteriously disappears in the midst of a mission with no trace of either the ship or its crew, but it reappears in Neptune's orbit after a seven year absence and it's sending out a distress signal.

The crew of the Lewis and Clark are convinced that Weir is not telling them something, and when they discover the Event Horizon, they find that things are not what they seem, and an evil presence has taken over the ship. Incidentally, the term event horizon describes the outer boundaries of a black hole.