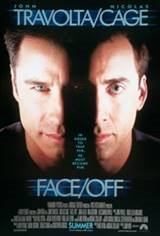 John Travolta and Nicolas Cage switching faces, hey, it could happen. Despite its wacky premise -- good FBI guy Cage has bad terrorist guy Travolta's face grafted on his own so that he can go undercover to find out where bad guy has hidden a lethal biological weapon -- it works.

Problems ensue when the bad guy gets the good guy face and proceeds to pretend he's cage's FBI character while Cage is trapped in prison.

Director John Woo does his usual ballet of bullets thing, but it's Cage trapped in a body no one recognizes him in and Travolta having a lot of fun trying to be good when he's bad to the core that really makes this movie come alive.