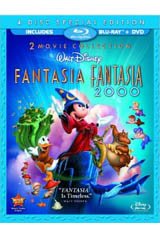 Disney animators set pictures to classical music as Leopold Stokowski conducts the Philadelphia Orchestra. "The Sorceror's Apprentice" features Mickey Mouse as an aspiring magician who oversteps his limits. "The Rite of Spring" tells the story of evolution, from single-celled animals to the death of the dinosaurs. "Dance of the Hours" is a comic ballet performed by ostriches, hippos, elephants and alligators. "Night on Bald Mountain" and "Ave Maria" set the forces of darkness and light against each other as a devilish revel is interrupted by the coming of a new day.

Everything on the DVD plus:
Disney View – This viewing mode maximizes the Blu-ray viewing experience with a 16 x 9 aspect ratio. Original artwork created by a Disney artist, in a style that complements the beauty of the film.
The Shultheis Notebook: A Disney Treasure (running time: approx. 14 minutes). An in-depth look at the recently discovered Schultheis Notebook. The detailed log was created by Herman Schultheis, an effects man on Fantasia, and intricately breaks down the film from a technical view. Many of the special effects used in Fantasia were a mystery to modern day animators until this notebook was recovered.
Interactive Art Gallery and Screensavers – Viewers can explore the artwork of Fantasia as never before, in HD resolution with unique Blu-ray interactivity and programming.
Audio Commentaries from Fantasia Legacy Collection

Musicana – Walt's Inspiration for a Sequel (running time: approx. 10 minutes). This documentary reveals rarely-seen art created for Musicana, a late 1970's project intended as a Fantasia sequel with a focus on exploring other cultures via their greatest musical compositions. Viewers are offered a look at the origins of pieces that were started by Walt, such as "The Emperor and the Nightingale" which was then taken over by a very young John Lasseter. Ultimately, Musicana was stopped to begin production on "Mickey’s Christmas Carol," but the memories of this piece still live on with the animators who conceived it.

Everything on the DVD plus:
Dali & Disney: A Date With Destino (running time: 82 minutes). This feature length documentary explores the collaborative relationship between Walt Disney and Salvador Dali, revealing how and why the Destino short came to fruition under the lead of Roy E. Disney in 2003 so many years after its inception in 1946.
Destino (running time: approx. 7 minutes) – The legacy of Walt Disney and Salvador Dali lives on in this highly anticipated short film.
Disney's Virtual Vault — BD-Live Feature
- Original DVD Bonus Features from Legacy Collection
Audio Commentaries from Fantasia Legacy Collection (total running time: 84 minutes)
- With executive producer Roy E. Disney, conductor James Levine, and producer Don Ernst.
- Audio commentary with the directors and art directors for each segment.