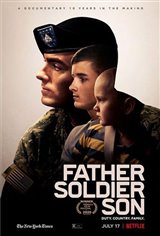 The story of American soldier Brian Eisch and his young sons, Joey and Isaac, whom he is raising alone.

After his divorce in 2004, Brian took Isaac with him to an Army post in Germany, leaving his younger boy, Joey, with his ex-wife in Wisconsin. However, soon after he returned home in 2007, Brian worried that Joey was being neglected and fought for custody of both boys. He succeeded.

His years in the service were tough on the youngsters, who had to stay with their uncle and cousins, who already had a full house. They also worried constantly about their father. They were both struggling, with Joey showing his pain by constantly getting into fights, while Isaac kept everything inside.

During a tour in Afghanistan, Brian was tending to a wounded man when he was hit by machine gun fire. With his legs badly injured, he returned home, finally able to reconnect with his sons.

The film, 10 years in the making, was inspired by a 2010 article in The New York Times by James Dao and Catrin Einhorn.