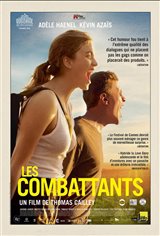 Although he’s never given much thought to his future, when his father dies, Arnaud takes on the family carpentry business with his older brother. However, when Arnaud volunteers for a self-defense demonstration during which a girl throws him to the ground, he’s intrigued and finds himself attracted to the girl, named Madeleine. Madeleine is convinced that the end of the world is coming and so she’s honing her survival skills. She convinces Arnaud to join her at a boot camp for a two-week period. However, when Arnaud does better than Madeleine during military training, they clash. He begins to feel camp is a waste of time and leaves. Madeleine, chastened, soon catches up with him and together, they try to survive on their own in the woods.