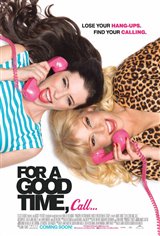 Lauren (Lauren Miller) is shy and reserved while Katie (Ari Graynor) is somewhat irrepresible. The two are polar opposites so it comes as no surprise that they have been "frenemies" since college. Despite their differences, they do have something in common&mdashthey both dream of living in a swanky New York City apartment but don't have the money to pay for it. So when they're re-introduced by a mutual friend (Justin Long), they reluctantly decide to join financial forces and become roommates.

Even with sharing their dream Gramercy Park apartment, they still can't seem to get along. Small differences and disagreements slowly get bigger and bigger, eventually reaching the boiling point when Lauren discovers what Katie does to making money—working as a phone sex operator.

Though she doesn't approve, Lauren finally joins Katie when she herself loses her job. Together, the two roommates work together to pay for their luxurious new apartment by creating a phone sex business, hoping that making money is as easy as it sounds. However, as the girls become business partners, friends even, a betrayal soon threatens their newfound relationship.