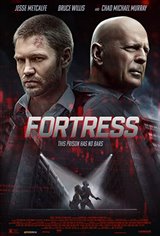 In this dazzling action cyber-thriller, Bruce Willis plays Robert, a retired CIA agent living at a secret resort in the woods. One day, his estranged son (Jesse Metcalfe) drives to the camp for a visit — but he’s followed by Robert’s old nemesis, Balzary (Chad Michael Murray). As the site is besieged by Balzary’s attack squad, father and son retreat to a high-tech bunker. But are its steel walls and advanced weapons powerful enough to match Balzary’s bloodthirsty plans for revenge?