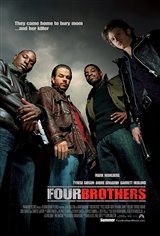 Watch Trailer
After their adoptive mother is murdered during a grocery store holdup, the Mercer brothers -- hotheaded Bobby (Mark Wahlberg), ladies' man Angel (Tyrese Gibson), family man and businessman Jeremiah (Andre Benjamin), and hard rocking Jack (Garrett Hedlund) -- reunite to take the matter of her death into their own hands.

As they track down her killer, they quickly realize that their old ways of doing business have new consequences, and discover that they are bound by ties thicker than blood.