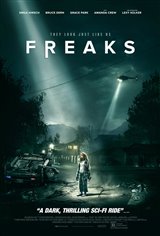 A paranoid father (Emile Hirsch) locks his seven-year-old daughter Chloe (Lexy Kolker) in their dilapidated house, warning her of mysterious dangers outside. He even teaches her to use an assumed identity if they're ever separated, and has a panic room if he ever doesn't come back from one of his forays to the grocery store.

Chloe wants desperately to get outside and makes a break for it one day when her sleep-deprived father drifts off. But the outside world isn't quite as she imagined it. For one thing, the light is disorienting. The neighbors, whom her father warned her about, are boring. She meets an ice cream vendor called Mr. Snowcone (Bruce Dern), who gives her a scoop of chocolate ice cream and tells her about her mother.

This is the beginning of an unravelling of mysteries as Chloe begins to see her mother around the house and comes to believe she's still alive. As layers of deception are peeled back, a government agency closes in, putting Chloe and her father in danger.

Filmed in Vancouver, British Columbia. Director Zach Lipovsky and some of the cast members are Canadian.